I’d like to start this story off with some good news. The flooding around the hospital finally cleared and I was able to reunite my husband and our dog. You can see their excitement in this video:

My husband and I were on our 50th straight night in the hospital when we heard that Hurricane Harvey, a category 4 hurricane, was barreling towards us in Houston – one of the most flood prone cities in the United States and home of the biggest Medical Center in the world. I guess fighting an extremely rare cancer and nearly going down in an airplane within the last year wasn’t dramatic enough (Lifetime Network, hit me up).

This hurricane felt way too ‘on the nose’. A giant metaphor. Symbolically, a hurricane is a lot like cancer. When you’re told about it, you’re not sure how much damage is coming and you can try to prepare yourself for the overall experience, but only when you’re in it do you finally see all the hurdles that make up the bigger picture. Like…

For Houston, the flooding is what truly made Hurricane Harvey terrible. Jeff’s Graft Vs. Host Disease, what we’re inpatient for now, is just like the flooding in that it’s the dangerous after effect that lingers. I’m sure you’ve seen a ton of media coverage on the floods, but here’s some pictures of what the outside and inside of MD Anderson looked like for us on day #1: 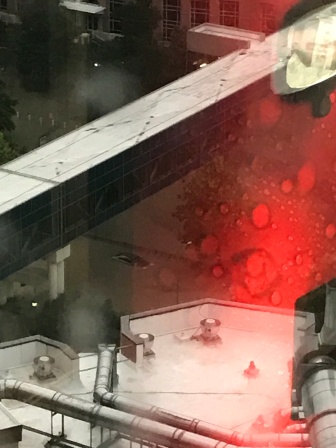 Yes, that’s a car flooded and abandoned in front of the hospital. One of many. Some of them positioned as if they were turning into the employee parking lot.

I spent most of the time we were on lockdown scrolling through Facebook and there were a surprising amount of people who thought those who didn’t evacuate were “stupid” and deserved no help. That was when I learned that nothing magnifies rage like cabin fever. 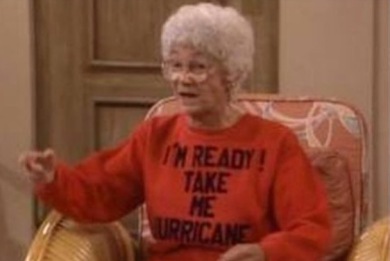 I’m making Jeff a shirt that says’I Survived Cancer and all I got was this Hurricane Harvey T Storm’.

If evacuating isn’t mandatory, that means businesses can stay open. Which means hospitals stay open. And, just to reiterate, this medical center is the biggest in the world. That’s a lot of employees (around 106,000) keeping A LOT of people alive.

HERE ARE SOME REASONS WHY STAFF DIDN’T EVACUATE: They were told to come into work and their coworkers and patients were counting on them.

Our night nurse worked 17 hours straight that first night. Nurses normally work on 12 hour shifts and I can only imagine how critical thinking holds up past 12 hours, much less 17. A simple mix up of medications or forgetting to flush a cvc line could mean someone’s life.

The flooding was so bad that nurses were sleeping in shifts of 4 hours in their offices and covering for each other, all while hoping their families and homes were surviving the storm. Eventually water had to be released from reservoirs, threatening even more homes that weren’t originally at risk. One of our nurses was sure it’d flood her house but all she could do was continue her shift and wait and see.

By the second day, a nurse arrived to work in the flooding. Did she kayak in? It was still badly flooded and constantly raining. All of the other nurses on the transplant floor cried when they saw her (I assume partially because they were exhausted and knew she’d provide some relief, but also because they knew how risky it was to try to make it in). Emotions were as high as the water. All sorts of lives were on the line. Doctors couldn’t make it in and were having to review things from home and call in orders.

The hospital was waiting for blood products to be flown in. Transplants could reject without them. On top of that, they were out of coffee. The staff were sleeping in 4 hour shifts on floors with NO COFFEE. It’s amazing how little coffee was available after one single day of lock down. I’m letting you know because if you’re ever in a hospital during a storm, bring coffee to barter with.

Stock up on your bartering foods early. This is the selection Target had to offer just 3 days before the storm. Apologies to my mother in law.

HERE ARE SOME REASONS WHY OTHER PEOPLE DIDN’T EVACUATE: Some people didn’t evacuate because they don’t have the means. Or maybe because they thought they’d go over to Joel Osteens church and be taken care of there?

I dunno, I think those cover A LOT of people.

As much as I’ve wanted to be out of the hospital and back in the comfort of our apartment over the last couple of months, I feel grateful that we were in MD Anderson during the hurricane. I knew that Jeff was being taken care of. If we had been home and something happened to him, who knows if I’d been able to get him help. But I do know that with the incredible care we’ve been given at MD Anderson over the past year, we would have also chosen to stay. It’s something I think a lot of people outside of the Texas Medical Center fail to think about.

The people of Houston deserve all of the help you can give. Here are a few links to start, and the NY Times link to some additional resources:

The South Texas Blood and Tissue Center is reporting a critical shortage, and has extended hours at all of its San Antonio-area donor rooms. To donate, call 210-731-5590 or visit their website for more information.

To help animals suffering from the disaster, visit the Houston Humane Society or the San Antonio Humane Society. The Houston Society for the Prevention of Cruelty to Animals has set up an animal emergency response hotline (713-861-3010) and is accepting donations on its website.

The United Way of Greater Houston flood relief fund will be used to help with immediate needs as well as long-term services like minor home repair. Visit their website to donate or text UWFLOOD to 41444.

Where to Donate to Harvey Victims