Skip to content
On May 27th, 2016 my husband and I eloped. Three days later, on the last day of our honeymooon in Mexico, we were transported to a small clinic where he underwent a life saving splenectomy without blood for 4 hours. Since then, he’s also survived: a fatal cancer misdiagnosis, toxic chemotherapy for that fatal cancer, a pulmonary embolism, an open liver biopsy, an allogeneic stem cell transplant, a week in the ICU, graft vs. host disease, a month of 104.5 degree fevers, six additional aggressive chemotherapies for his actual cancer – a cancer with less than 20 cases in medical history – Hepatosplenic T Cell Lymphoma, Alpha Beta. The worst fraternity ever. And this all came after our plane’s second engine failed on our medical flight back to Los Angeles. 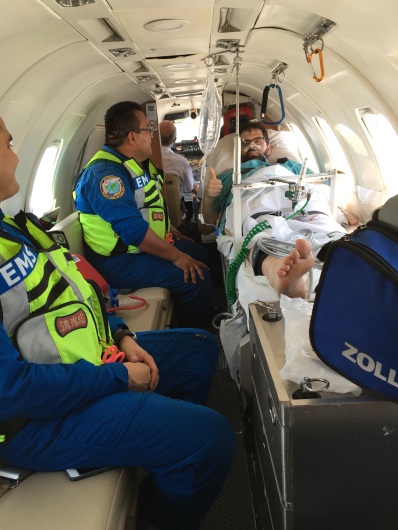 Spoiler alert: we made it.
I was a huge baby before Jeff’s spleen decided it wanted out of our marriage. I was squeamish. I hated hospitals. I’d cry while giving blood.

Now that my husband’s life was on the line, I found myself unable to look away. Because I had to be active in his care, I saw things that could literally save people’s lives if they only knew about them.

My husband was misdiagnosed at a Top 5 cancer hospital. We were told with 99% certainty that he would die within months. Months later, when they discovered they were wrong, they didn’t react like it was out of the norm. When we got to MD Anderson, they told us what we weren’t surprised to hear: 35% of cancers are misdiagnosed.

When my husband’s cancer didn’t fit his diagnosis of Angiosarcoma, I read every medical paper I could find, which was difficult because most sites make you pay for them. I began looking for people living with the cancer – through Facebook Groups, or searching Go Fund Me and then finding their families online – to ask their personal experience. I became the type of person who deserved a detective’s license or maybe a restraining order. Through connecting with people, I realized my husband’s cancer wasn’t acting like their cancers. It was acting like a blood cancer, which was now spreading faster because the chemo he was on was for a sarcoma. The oncologists labeled his issues “tumor related”. They wanted him to continue the treatment I knew would kill him. At that moment, I stopped putting all of my trust into the doctors and took as much control as I could into my own hands. A specialist finally helped push for his re-diagnosis, and Jeff is now heading into an allogenic stem cell transplant.
I’m hoping the things I’ve learned along the way help you gear up for you or your loved one’s treatment. Cancer is surprise enough, so spare yourself more surprises! Reach out to me personally for anything you’re curious about that doesn’t already exist on the site. I’ve set up links on the side of this page to help navigate to the answers you’re looking for.

One thought on “It’s Called Medical ‘Practice’ for a Reason”